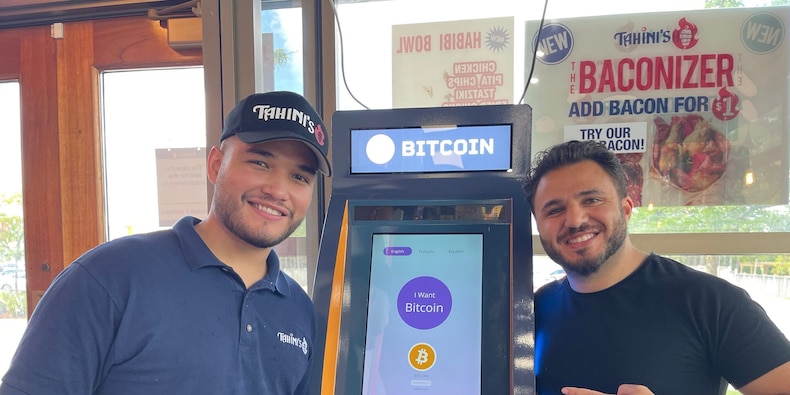 A small restaurant chain in Canada is plowing all of its profits into bitcoin. Its returned 460% on its investment and is tripling locations during the pandemic | Currency News | Financial and Business News

Tahinis is a family-based restaurant chain that along with its Middle Eastern cuisine serves this advice to small-business owners everywhere: Invest in bitcoin.

Tahinis is billed as the world’s first restaurant chain to invest 100% of its cash reserves into the cryptocurrency. Its founders, brothers Aly and Omar Hamam, said bitcoin exposure has been key in aiding its expansion in the face of the COVID-19 pandemic and soaring inflation that’s sent prices soaring for ingredients they need for shawarma and other dishes. The company based in London, Ontario, Canada, first invested in bitcoin in August 2020.

“We’re up, to date, 460% on our initial investment and we didn’t stop there,” Tahinis chief marketing officer, Aly, told Insider in a recent interview. “We will continue sweeping excess profit into bitcoins. We even bought the [April 2021 price] top and then rode it all the way down, and we just kept buying month after month after month. So it has worked like a charm for us, “he said.

Tahinis follows a so-called “bitcoin-standard strategy” under which it operates in fiat currency, or Canadian dollars, then invests all profit into bitcoin, a move Aly said was similar to that of MicroStrategy’s.

The data analytics company uses excess cash to purchase what it sees as a “dependable store of value.” MicroStrategy recently held 114,042 bitcoins, valued at about $ 6.8 billion as of Thursday. Aly for a while had ignored bitcoin after one of his financial idols – Warren Buffett – called it “rat poison squared” in 2018.

Tahinis keeps working capital in cash for a few months and then the profit, part of its treasury, is sent into bitcoin. Privately owned Tahinis couldn’t disclose how much bitcoin it holds on its balance sheet but said sales at its restaurants now exceed $ 8 million over the past year.

The company in 2021 will expand to nine locations from eight and is on track in 2022 to have a total of 29 restaurants. Aly said Tahinis has worked with dozens of small businesses worldwide onboarding them to a bitcoin-standard strategy.

“The main problem that we have right now is that dollars are devaluating,” Aly said. “Central banks will say inflation is only 5%. But that really depends on what you want to buy. Poultry is up 45%, beef is up 25%, imported goods and spices are up 65%, oils are up 110%,” since March 2020, when the pandemic was accelerating, he said. “So it made sense to put our money into [bitcoin] and that will outstrip any inflation rates we see for the coming decade. ”

The Hamams are sensitive to currency devaluation after seeing their parents’ wealth and savings hurt by a 65% drop in the Egyptian pound against the US dollar between 2012 and 2017. The brothers were in Tahrir Square in 2011 during the Arab Spring uprising that led to the ouster of then-President Hosni Mubarak.

“We faced the riot police, we got hit with tear gas,” said Aly. “We came to Canada the following year with a reinvigorated hope to start our new lives here,” which led to Tahinis. The Hamams had previously obtained dual citizenship through their father who earned a Ph.D. in Canada and later worked as a mathematics professor in Saudi Arabia.

Tahinis has installed bitcoin machines in every restaurant to encourage employees and customers to buy the cryptocurrency. It doesn’t take bitcoin for food payments in part because accounting and tax reporting is much easier to operate in fiat currency and it wants to promote holding bitcoin.

Tahinis started recovering from the pandemic in May 2020 after sales plummeted by 80% and forced layoffs. Along with bitcoin, having a quick-service restaurant model rather than an in-person dining model requiring more square footage to operate has helped.

“We had more people sign up for franchises after COVID than before COVID,” Omar Hamam, Tahinis CEO, told Insider.

“We have a full marketing team that works every day to push out content to make people laugh,” and to see Tahinis’s food on TikTok and Instagram, said Omar, “and that we have our own supply-chain company helps a lot. we’ve really tackled the business from every aspect. ”

Getting to Know: Thomas Ransom with Truist Financial | Economic news