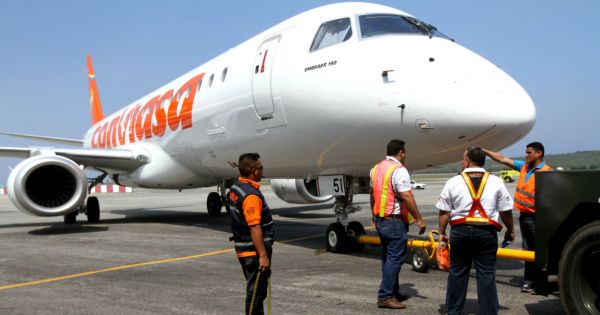 Venezuelan airline Conviasa has announced it will halt its Caracas-Buenos Aires route until at least September due to refueling problems all its planes are facing for being part of a company blacklisted by the Treasury. American.

This decision comes the day after the seizure of Emtrasur’s Boeing 747-300 at Ezeiza airport in Buenos Aires. Emtrasur is a cargo subsidiary of Conviasa and the plane was previously registered under Iran’s Mahan Air, also linked to terrorist activities.

The Venezuelan carrier argued that the cause of the cancellation lay in the “refusal” to access the “services necessary for the execution of our operations” at Ezeiza airport.

According to the schedule and following Friday’s announcement, 12 flights will be suspended between July 11 and September 20.

“Our airline has the obligation to notify the cancellation of scheduled flights” for not having access to runway services from “aeronautical and fuel supply suppliers”, insisted Conviasa on its website.

About 2,000 passengers will be affected by the cancellations. The company has yet to announce what will happen to passengers already holding tickets for these services.

As of February 2020, the White House banned Conviasa from US airspace, in addition to new Treasury Department sanctions. One of these measures meant that no one wanted to refuel the Conviasa or Emtrasur planes for fear of reprisals from the United States.

A crew of Venezuelans and Iranians have been banned from leaving Argentina pending investigations into the real motives behind the alleged cargo operation in the country by the Emtrasur 747.

An Airbus A340-600 Conviasa registered YV-3533 also landed in Ezeiza at least four times between April and May. Both planes flew under the colors of Mahan Air. Venezuelan President Nicolás Maduro reportedly used this Airbus to fly to Iran in June. This same plane is also the subject of an investigation in Chile for trips between Caracas and Santiago which would have transported several Iranians among its passengers.