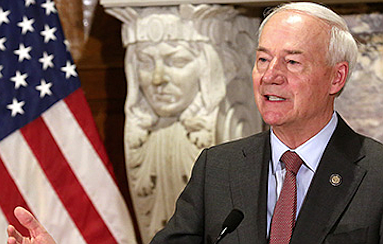 Arkansas is one of two states that will deny federal funding available for the second phase of pandemic emergency rental assistance, with Governor Asa Hutchinson saying the economic climate is robust enough for it is no longer necessary.

Hutchinson said on Friday he was sending a letter to U.S. Treasury Secretary Janet Yellen advising her that Arkansas planned to withdraw no more than 39%, or about $60 million, of funds available just for support housing stability programs that may include housing assistance. Components.

Critics said the decision was confusing and disappointing.

The state received $173 million from the federal government in early 2021 to distribute to tenants who were behind on rent and utility payments due to the fallout from the covid-19 pandemic.

“Currently we have $6.7 million left in our rental assistance funds, and the federal government wants us to receive an additional $146 million,” Hutchinson said. “Our economy has come back. There are a lot of jobs there, and we have put in place housing assistance programs that were pre-pandemic. We are returning to work to the same extent before the pandemic, and we have the same opportunity to move up the economic ladder, so we need to go back to the same rental assistance we had before.”

Arkansas’ unemployment rate is 3.1%, the 16th lowest among US states, according to the Bureau of Labor Statistics.

Hutchinson said the ruling makes Arkansas one of only two states to have withheld the full amount of federal dollars. Nebraska Governor Pete Ricketts has pushed back against pressure from the Treasury Department and his own state legislature to agree to the next round of federal rent aid, including vetoing a measure that would have forced the State to apply.

“The state government has the ability and the obligation to help make Arkansas a better place to live and raise a child, and refusing this investment goes against that commitment.” he declared. “Tens of thousands of Arkansans are behind on rent or are not confident in their ability to make next month’s payment. Thousands of people who have asked for help have been turned down. Instead of refusing to put money in the pockets of Arkansas families in need, we should make it easier for families to stay in their homes and make ends meet.”

The Republican governor said he plans to review the state’s request on Friday with an official connected to the White House.

“I hope they approve of our request for flexibility to have this type of housing stability initiative in Arkansas and not insist that we take the full amount based on housing assistance,” a- he declared.

Hutchinson said he would offer an alternative option to the federal government in which Arkansas uses 39% of the funds to allow nonprofits, such as Our House and Restore Hope, to help families or people without sheltered or at risk of moving from crisis to long-term economic stability.

“What does the tenant or individual need? said Hutchinson. “A few specialist peers to help them get the training they need to get a job? Is it substance abuse issues that we need to provide support for? What is the housing stability challenge that we can use these funds for specific efforts to make a difference in the lives of Arkansans?”

At a news conference Friday, Hutchinson was asked why the state shouldn’t take federal funds anyway, and he said he’s given the matter a lot of thought.

“First of all for me, when there’s no need in the state and we haven’t fully utilized the resources and we’ve fully recovered and in a pre-pandemic phase, that doesn’t makes no sense to start an absolutely new rental assistance program that would go on forever,” he said.

Hutchinson also said the funds would come with restrictions that wouldn’t allow states to distribute assistance to landlords and renters. Instead, the funds must go to the tenants.

“Under the restrictions they have and the top priorities we would want to spend that money on, if we can’t have that flexibility, it doesn’t make sense for taxpayers to use it for that purpose,” he said. he declared.

Sealy said he didn’t understand why that would be a problem.

The governor said the state is shifting its focus from supporting people who may have experienced short-term economic hardship due to the pandemic to helping families achieve long-term economic stability and growth.

“We have programs in place and community organizations that will help with rental issues, but we’re going back to the rental support we would have before the pandemic, which makes sense to me,” he said. “This money, I wish it could go back to the treasury, but in fact it will be clawed back and sent elsewhere where there is greater need, and to me that is responsible management of taxpayers’ money. .”

Hutchinson said the decision does not mean needy Arkansans have been left without help.

“Community action agencies across the state still have access to more than $6.7 million in funds remaining for this federal fiscal year to help low-income tenants in crisis through the Emergency Solutions Grant program,” a- he said in his letter.

More than $18 million was distributed to 36 social service agencies across the state in 2020 through the COVID-19 Emergency Solutions Grant program. The annual grant from the United States Department of Housing and Urban Development was funded in 2020 by the Coronavirus Aid, Relief and Economic Security Act.

Sealy said the remaining money was not enough to meet the state’s needs.

Sealy said one of the major flaws in Hutchinson’s concept of economic stability is that it doesn’t take into account how those overdue rental fees piled on top of each other.

“There may be more jobs available, but people are way behind,” he said. “And even people who have gotten back on their feet and are working find themselves behind on rent. A lot of late fees are big and cause debt to swell, so people never catch up.”

Huddleston said while the unemployment rate is low, Arkansans still struggle to get and keep gainful employment due to childcare, housing, transportation and other expenses.

“We should make it easier for families to keep a roof over their heads,” he said. “We only have a state surplus because we don’t spend enough when it comes to investing in our own people. … In a state where 22% of children live in poverty, we don’t We can’t afford to reject federal dollars that could keep families in need safe and secure.”

Sealy said it has become apparent that homelessness, especially in Little Rock, is increasing and becoming more visible.

“The pandemic has had a major effect on low-income people, and especially on black neighborhoods in Little Rock and other communities,” he said. “We’re not off the hook yet.”

Last month, U.S. Rep. French Hill, R-Ark., sponsored legislation that he hopes will stop the redistribution of millions of unspent federal dollars — aimed at helping tenants who are struggling financially due to of covid-19 – from rural to urban areas.

The US Treasury Department’s “clawback” of pandemic rent relief funds comes at the expense of tenants in less populated areas, Hill said.

Hill introduced the Rural Tenant Protection Act, which would require the Treasury Department to stop taking back federal rent relief funds that would help rural tenants — funds distributed by state governments rather than counties or cities — and to return funds he’s already taken back, including nearly $9 million from Arkansas.

The withdrawal of funds, announced in January, is an “attack on rural families in America by the Biden administration,” Hill told the House.

The Treasury Department plans to donate unspent funds to California, Illinois, New York and New Jersey, where demand for rent relief is highest. Hill noted in his floor speech that these “blue states” have already doled out millions in rent relief funds.

Keesa Smith, deputy director of the state Department of Human Services, said Friday that the agency is aware of Hill’s bill and the conversation surrounding it.

“We have reviewed our current program, and there is statewide coverage and all areas of the state have access to our current funds. [$6.7 million] and all of our plans ensure that the people who need it most, wherever they are in the state, have access to these housing stability funds,” she said.

The federal Consolidated Appropriations Act distributed $46.5 billion in rent relief funds at the start of 2021. The Treasury Department announced that 4.7 million payments had been made and $30 billion had been spent or committed at the end of February.

Cities and counties with populations over 200,000 received their own pots of money from the Consolidated Appropriations Act, while state governments were responsible for distributing the funds to all other areas.

The Department of Human Services has made adjustments to its rent relief program at the request of Congress, state lawmakers and tenant advocates.

The program initially required landlords to submit matching requests for each tenant, and some landlords declined to participate. The Department of Human Services relaxed that requirement in September after pressure from Congress.

In January, the department suspended its acceptance of rent relief applications to “ensure that we are not accepting more eligible applications than we can fund,” the spokeswoman for the department said at the time. department, Amy Webb. The department called the hiatus when it changed the distribution process so that checks are issued to both tenant and landlord as a fraud prevention measure, on the recommendation of some state lawmakers.