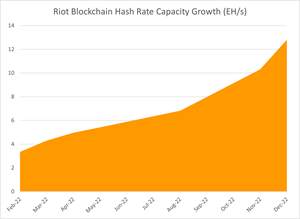 “Riot is well positioned for continued growth and production in 2022,” said Jason Les, CEO of Riot Blockchain. “We are pleased to announce that miner deployments to one of our immersion cooled buildings are now fully underway. We have refined our process for running immersion-based mining facilities and are now launching tests on the productivity improvements supported by this cooling technology. We expect to see increases in our hash rate capacity as we continue to execute deployments in the newly completed Building F and the soon to be completed Building G.

Additionally, we are closely monitoring current weather conditions in Texas and the potential impact they may have on energy supply and demand in the ERCOT network. As the largest Bitcoin miner by developed capacity in Texas, Riot is currently scaling back its Bitcoin mining operations to the Whinstone facility. Riot employs nearly 200 full-time team members at the Whinstone facility, in addition to 400 other contractors, in Rockdale, Texas, and we deeply value our relationship with the surrounding community and the State of Texas. at large.

Riot intends to continue providing monthly operational updates and unaudited production results for the foreseeable future or until otherwise disclosed. These updates are intended to keep shareholders informed of the company’s progress in executing on Riot’s previously announced hash rate growth and to keep investors informed of the company’s development of essential bitcoin mining infrastructure to reduce future growth risks.

Since its last monthly update, the company has rolled out around 3,000 S19j Pros, with an additional 7,924 miners set up for deployment. Additionally, 5,768 S19j Pros have been shipped from Bitmain and are expected to be received in February 2022. Once the miners are staged and those in the February delivery are deployed, Riot expects to have a total of 46,244 miners deployed with a hash rate capability of approximately 4.7 PE/s.

Global logistical issues have impacted some miners’ shipping schedules, including a delayed shipment in January that was pushed back to February. Riot remains in close communication with Bitmain and logistics providers who are working to mitigate delays where possible.

In anticipation of potential future expansion opportunities, Riot has secured six additional 100MW High Voltage Transformers and forty 2.5MW Medium Voltage Transformers, which are currently in storage. The company is evaluating the use of its development expertise and operational efficiency to further expand its Bitcoin mining capacity.

Riot continuously monitors its balance sheet, assessing the level of bitcoin retained from monthly production taking into account operational and expansion cash requirements. The company continues to take a long-term view of its bitcoin holdings and believes it is in shareholders’ best interests to have strong bitcoin holdings on its balance sheet.

The company is proud to announce personnel changes at head office, including the hiring of Ashley Lewis, as Chief Information Officer.

Filing of the 2021 annual financial statements

Due to its market value, Riot is now an Accelerated Large Filer as defined by the Securities and Exchange Commission. Accordingly, the legal deadline for filing the Company’s annual report on Form 10-K is March 1, 2022.

Riot Blockchain (NASDAQ: RIOT) focuses on Bitcoin mining and, through its subsidiary Whinstone, hosts Bitcoin mining equipment for institutional clients. The Company is expanding and modernizing its mining operations through the development of industrial scale infrastructure and the supply of latest generation miners. Riot’s headquarters are in Castle Rock, Colorado, and the Whinstone facility operates out of Rockdale, Texas. The Company also has mining equipment operated in upstate New York under a co-location hosting agreement with Coinmint, LLC. For more information, visit www.RiotBlockchain.com.