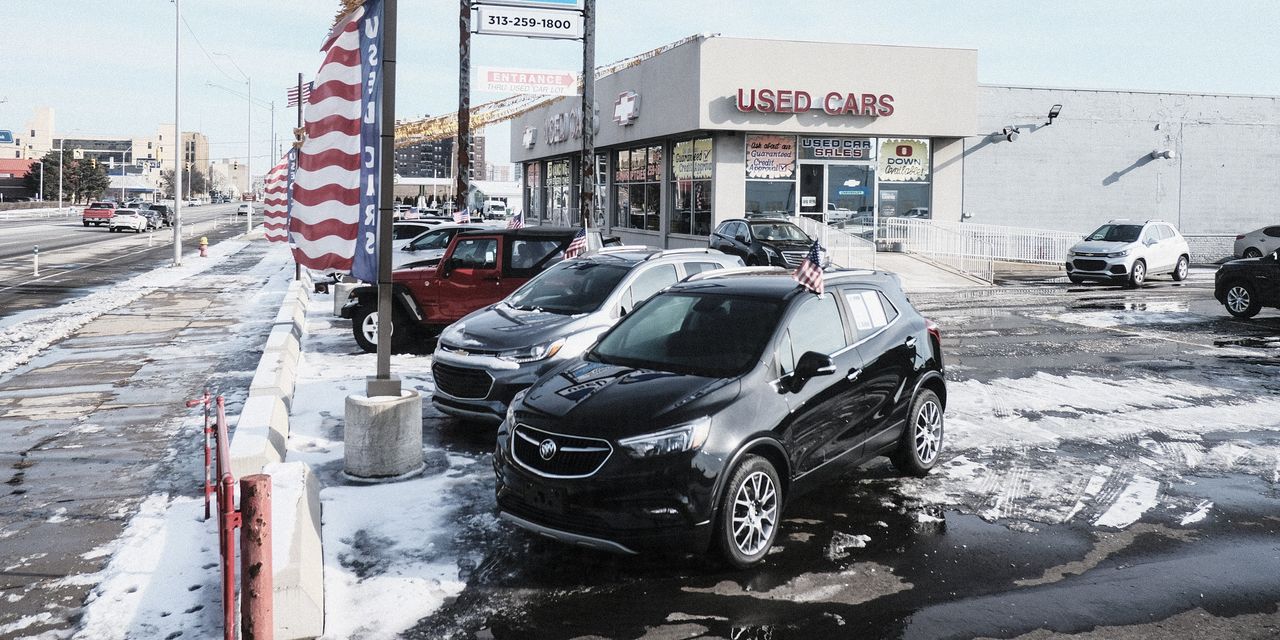 An intensification of the sale of US government bonds pushed benchmark borrowing costs above 2% for the first time since mid-2019, after data showing sustained inflation fueled new bets that the Federal Reserve will quickly remove pandemic stimulus.

Stocks fell, with the S&P 500 losing 1.8% and the Nasdaq Composite dropping 2.1%, after the Labor Department released data showing US inflation accelerated to an annual rate of 7 .5% in January, a four-decade high. Yields, which rise when bond prices fall, had hovered in a narrow range during the overnight trading session, but jumped immediately after the report.

Of particular concern for investors: Core prices, excluding the volatile food and energy categories, rose 0.6% from the prior month. That was above the 0.4% gain forecast by economists polled by The Wall Street Journal and a strong sign that inflationary pressures are not easing as quickly as many investors had hoped.

Yields on shorter-term Treasuries, which are particularly sensitive to the outlook for short-term monetary policy, led the gains. The two-year yield posted its biggest one-day rise since 2009 to end at 1.560%. Yields on longer-term bonds also rose sharply, with the 10-year yield exceeding 2% for the first time since mid-2019 to stand at 2.028%.

Overall, recent data releases have made it increasingly difficult for investors to assume inflation will subside on its own, said John Briggs, head of Americas strategy at NatWest Markets. .

“If consumers and workers start believing that inflation won’t be transitory, they’ll start demanding higher wages and higher inflation will work its way into the system,” he said.

Investors and economists pay particular attention to treasury bond yields because they set a floor on borrowing costs across the economy and are a key part of the financial models that investors use to price shares and other assets. This year’s rise has pushed up mortgage rates and contributed to a decline in stocks, although it also signaled a strong economy capable of generating inflation.

The 10-year yield ended last year at 1.496%. It has climbed since then, in part due to a change in messaging from Fed officials, who expressed growing concern about inflation and an increased urgency to tighten monetary policies.

Recent data has reinforced the idea that the Fed could raise rates much faster than previously thought, and perhaps even more than investors expected. Yields jumped on Friday after the Labor Department said the economy had added significantly more jobs than analysts had expected last month. Employers also paid workers more than analysts had expected, pointing to underlying inflationary pressures that could linger even after companies resolve temporary supply and transportation issues.

Thursday’s data was arguably just as powerful, some analysts said. Investors hoped to see signs of slowing consumer goods inflation as companies pile up inventory, but said the evidence was largely absent. Meanwhile, service-sector inflation has continued to climb, presenting what some economists see as a longer-term threat, as these price increases tend to be more rigid.

Interest rate derivatives echoed the movement in Treasury bills. Fed funds futures indicated that investors believe there is a greater than 70% chance that the Fed will raise short-term rates from their current near-zero level to at least 1.75% from by the end of the year, according to data from the CME Group. That was up from a 22% probability on Wednesday and 1% a month ago.

Investors also expect the Fed to soon begin to reduce its holdings of Treasuries and mortgage-backed securities, which could put additional upward pressure on yields.

Although barely high by historical standards, a 10-year yield of 2% still represents a significant change from 2020, when it hovered around 0.6% for months, even as stocks were picking up and investors were raising their inflation expectations.

At the time, Fed officials were signaling that they would be cautious about raising interest rates — a reaction not just to the pandemic but to the previous economic expansion, which was largely defined by a slow inflation.

Investors responded not just by buying bonds, but by piling into all forms of riskier assets, from cryptocurrencies to smaller tech companies unlikely to make significant profits until later. Ultra-low interest rates make such investments more attractive by reducing the cost of abandoning safer alternatives, and investors have unwound some of those bets in recent months as yields have risen.

Thanos Bardas, global co-head of investment quality and senior portfolio manager at Neuberger Berman, said the 10-year yield is now expected to settle in a range between 2% and 2.5%, reflecting a major change in the economy and the need for central banks in the developed world to “change course very, very soon, very aggressively to realign with the new reality”.

He added that he expects to see “lots of volatility across all asset classes and tougher times for many investors” as central banks go that route.

Still, some investors have warned that the longer-term outlook for interest rates remains uncertain and that global demand for Treasuries, as an ultra-safe and easy-to-trade asset, could limit some of the damage.

For now, there are good reasons to bet on a reduction in the spread between short and long-term Treasuries, given that the Fed seems certain to raise rates in the coming months, but could still adjust to future, longer-term economic data, said Michael Lorizio, senior trader at Manulife Investment Management.

“There is such a need to own US Treasury debt around the world,” he added.

Peloton’s rabid fans, celebrity coaches are key to the future