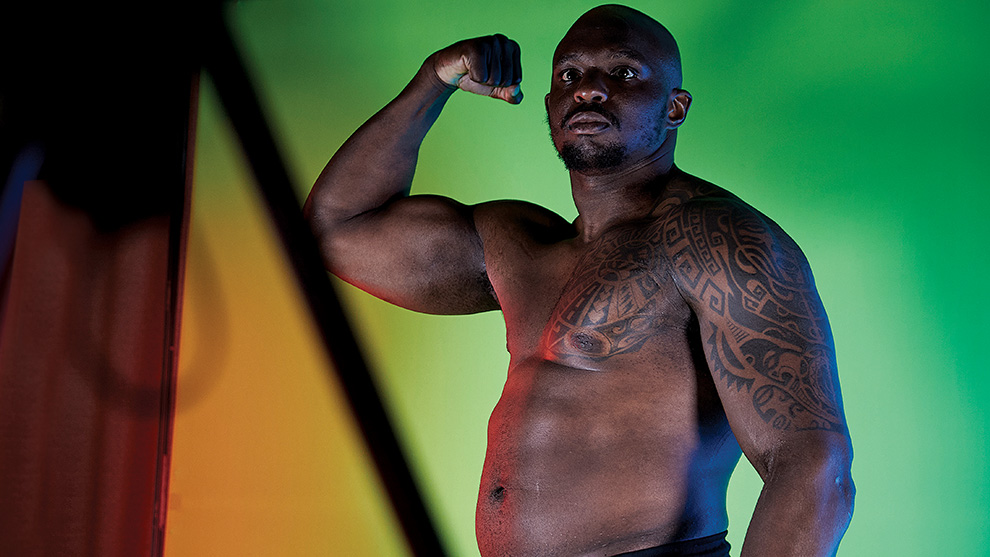 DILLIAN WHYTE has never ducked a question in a professional career that is now entering its second decade.

But the 35-year-old remained wary when asked where in London he had put the finishing touches on his preparation for Saturday’s comeback fight against Jermaine Franklin.

“The gym is called Nun Ovyer,” he said with a perfectly straight face. “Case of the Nun Ovyer.”

Whyte, however, is not deliberately obtuse and in fact has every reason to keep his moves a secret since returning from training camp in Los Angeles a fortnight ago.

While he was away, his close aide’s son Dean Whyte, often referred to as his “brother”, was shot dead in Brixton in an incident believed to be the result of a “gang feud”.

“I won’t disclose where I train,” Whyte said. “I don’t want people coming to where I train. It is serious work.

“I’m in Luton. It gets me out of London and obviously there’s a few things going on in London at the moment that involve my family, so I wanted to get out of London to focus and not get caught up in it. Times are sad, so I just have to focus on my job and it’s a very important job.

That’s all. This weekend, Whyte returns to the ring for the first time since being knocked out by Tyson Fury in April, under the stars at Wembley Stadium. In a strange twist of fate, his first step towards redemption comes just a few hundred yards away at Wembley Arena.

Given the family grief, Whyte was told that such a big fight, against an undefeated and ambitious heavyweight in Franklin, could have come at a bad time.

“Come on man,” Whyte said, still no sign of a smile. “It’s my job and I have a job to do. It’s probably the right time because now I just want to inflict even more damage. I want to channel it. I smile a lot, laugh a lot and joke a lot, but when the switch flips, boom, it’s literally from Mr Smiley guy to a screaming psychopath.

“Listen, mate, me and you could have a cup of tea and laugh, but if I need to hit you, I’ll hit you.”

Since that night at Wembley Stadium, when he was sent off with a second remaining in round six, Whyte has made some big changes behind the scenes as he attempts to move up the heavyweight ladder. Chief among them was parting ways with former trainer Xavier Miller and linking up with Buddy McGirt instead,

That meant moving to Los Angeles for his training camp where he worked alongside basketball and NFL players and lived out of a suitcase.

“I stayed in a hotel the whole time,” he adds. “I’m not a big shot, I can stay in a tent or caravan, I’ve done that before and it’s no problem for me. I will do whatever it takes to give my all in this game. I’ve slept under a tree in my life, I’ve slept on a bench – a hotel is no problem. I’m not in Hollywood, I’m in Woodland Hills.

“Nothing is hard about it. I’m very adaptable and that’s why I was able to survive and get to where I am in life. You can put me in the desert, in Finland, anywhere. where. I’ve been surviving since I was a kid, that’s what I know how to do: survive and fight. As sad as it sounds, those are the two things I know how to do best.

Whyte had been working with Miller since the first clash with Alexander Povetkin in August 2020, when he was rammed by the Russian in the fifth round in Brentwood, Essex. The two bonded for the successful rematch against Povetkin seven months later and continued their alliance for the Fury fight.

“There is a time and a place for everything,” says Whyte. “Xav is a good coach but that experience was lacking. Buddy’s been there: Brewster vs. Klitschko, Tarver vs. Roy Jones. He had guys in great fights and if you look back you can see the information he gave and also the way he gave it the top level experience is the only thing that can get you give that.

“My team said, ‘listen, in the last fights this and that happened, we need something different’. I’m a loyal person and sometimes I can be clouded by loyalty. These guys said we had to make a change and I trust them and we sat down as a team and looked at it and made our decision.
Whyte calls Portugal home these days – and he and Miller had done the majority of their training at a base there – but everything has changed for his side.

“I get up at 7 a.m., have breakfast, relax, play X-Box and rest,” Whyte says of LA. “Then the first thing I’ll do is hit the gym for my strength and conditioning work, maybe I’ll get some therapy or some extra mobility or cardio. I’m going to eat and then rest before I go. head to Kaminsky’s boxing gym around 7 p.m. to do some spar, pads or bag work with Buddy.

” I learn a lot. He’s a very technical guy. He’s a good guy, a very humble man considering his accomplishments. I think he trained nine world champions. It’s a good change for me.

“I had good coaches, but he is more of a teacher. Being on bags or towels with him can be annoying because he stops you all the time saying “no no no, we’ll do it like that”. A lot of fighters don’t change at this point in their career because the idea now is that you’re doing what you’re doing: you’re a puncher or a brawler or whatever. But for me, it’s good to find someone I feel like I’m improving with at this point in my career.

On his time in Los Angeles as a whole, he added, “Overall it worked out. Would love to go back, but we might have to split it up because it didn’t always work out with travel and different time zones and everything. It’s not ideal. When you travel, you lose a week each way. It can be difficult. Flights are long, man.

“Some people may feel isolated there, but I don’t care. I’ve been in real isolation before, so for me it’s like anything. Some people are small in spirit, don’t want to travel or see things. I like traveling and discovering different things, understanding different cultures, mentalities and religions. There is a bigger life outside of boxing, so understanding the land and the people is an integral part of that.

But for now, Whyte, 35, insists his focus is purely on boxing. He is a strong favorite to beat 21-0 (14) Franklin and if all goes according to plan, he hopes to box three times in 2023 after having managed only two fights in the last 27 months.

His fight with Fury was on BT pay-per-view after Frank Warren won the purse bid, but that showdown is back on a DAZN show promoted by Eddie Hearn. It would suggest there is a clear path to a rematch with Anthony Joshua, who himself is rebuilding after back-to-back defeats to Oleksandr Usyk.

A rematch between the two Londoners, who faced off for the British and Commonwealth titles in 2015, looks like a natural fight at this stage, especially if Fury and Usyk can stage their own clash next year.

“I would love to fight Joshua two or three more times,” says Whyte. “I want to be involved in the best fights, tough fights and fights that give you that extra buzz. It would be nice to be involved in a trilogy too, I want that with Joshua.

“I’m still a free agent and it’s a one fight deal, but that’s heavyweight boxing, never schedule another fight while you’re already in one. Of course, I would love this fight with Joshua – he’s one of three people I’ve lost to. I already avenged one [against Povetkin] and I really want to avenge the other two.

“Avenging that is even better for me than winning a world title, avenging my two losses. I still have a lot of life in me in this game. There are a few things to think about but I try to keep it simple .

“As a team, we’ve always said, when it’s time, we’ll find out. But I’m still healthy and I don’t have a lot of mileage on the clock. I’m still happy and I like going to the gym every day. I’m still excited to train every day. Let’s see what happens.”

The reality is that it would be very difficult to recover from a shock loss to Franklin. Now it’s up to him to make his rise up the heavyweight rankings everyone’s business.