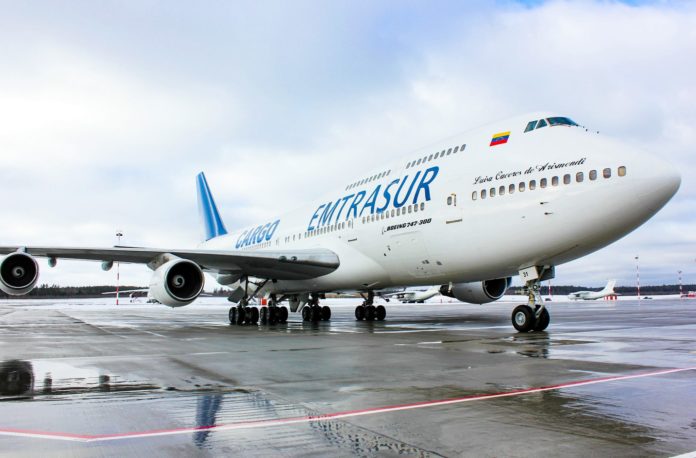 Venezuelan government warns of US attempts to ‘steal’ cargo plane

A Boeing 747-300 belonging to Emtrasur landed at Ezeiza International Airport in Buenos Aires on June 6. Two days later, the plane was controversially was denied permission to land and refuel in Montevideo while in flight. After his forced return to the Argentine capital, he was grounded by local authorities.

“The United States wants to fly a plane that legally belongs to Venezuela. The order comes from an imperial court in Florida,” Maduro said on a television broadcast Wednesday.

The country’s president went on to call for the “support of the Argentine people to recover this plane”.

Emtrasur, a subsidiary of Venezuela’s national airline Conviasa, acquired the 36-year-old cargo plane in January from Iranian private company Mahan Air. It has a capacity of 90 tons and 600 cubic meters and is the company’s only aircraft.

The plane, named “Luisa Cáceres de Arismendi” in honor of a heroine of independence, was carrying some 50 tons of auto parts from Mexico to be delivered to factories in Argentina. It would previously have been used for cargo shipments from countries like China and India as well as delivering humanitarian aid to Caribbean countries.

Argentine authorities seized the plane’s cargo and the crew’s passports. The Boeing 747-300 was carrying 14 Venezuelan nationals and five Iranians, allegedly to help and train their Venezuelan counterparts.

The plane and its cargo were subjected to several inspections following judicial warrants which revealed no irregularities. Federal Judge Federico Villena ordered the cargo published end of July.

Last Tuesday, Villena too authorized 12 crew members to leave the country. Three Venezuelans, believed to be leaders of Emtrasur, and four Iranians, including pilot Gholamrez Ghasemi, are still under investigation for undisclosed reasons.

Emtrasur management reiterated required release of the plane, arguing that the judicial authorities found no wrongdoing and that the presence of Iranian crew members was stipulated in the purchase contract as technical assistance.

The case has fueled speculation in the Argentine press, with outlets alleging the Iranian nationals had links to groups such as Lebanon’s Hezbollah. However, these claims have not been backed up by any evidence, while the head of Argentina’s Federal Intelligence Agency Agustin Rossi told reporters that there were no international alerts or warrants for any of the crew members.

While the aircraft’s detention was not explained for many weeks, Reuters revealed that on July 19, the US Department of Justice (DOJ) filed a request for confiscation of the Boeing 747-300 on the grounds that it violated US sanctions and export control laws.

Mahan Air has been blacklisted by the US Treasury Department for its alleged ties to the Islamic Revolutionary Guard Corps’ Quds Force, an organization that Washington designates as “terrorist”. For its part, Conviasa was sanctioned in 2020 alongside several other Venezuelan state companies as part of US efforts to overthrow the Maduro government.

The DOJ argued in a statement that Mahan Air transferred custody of the aircraft “without US government authorization” and wants the aircraft flown into US territory and confiscated.

The battle over the Emtrasur jet follows a series of seizures of Venezuelan state assets as part of the sweeping economic blockade imposed by the United States against the Caribbean nation.

Following Juan Guaidó’s self-declaration as “interim president” in January 2019, the Trump administration proceeded to freeze Venezuelan assets based in the United States and place them under the control of the radical opposition. The main one was the US$8 billion oil subsidiary Citgo, whose management Guaidó has since been accused of endangering the company.

Washington’s allies followed suit, with Colombia seizing agrochemical producer Monómeros and handing it over to the US-backed faction. Similarly, judicial authorities in the United Kingdom have repeatedly refused to return gold reserves worth $1.7 billion to the Central Bank of Venezuela.